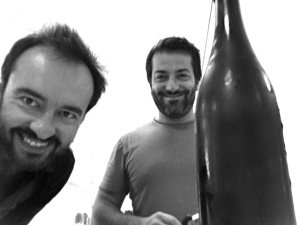 Franciacorta, a celebrated sparkling wine/region of Lombardia, has recently been given a chance to make a radical shift.  But unlike scenarios where a revamp or major production change comes about due to quality problems or a slump in market interest, this one is entirely due to Giovanni Arcari, Nico Danesi and Andrea Rudelli’s passion for their wine, the region, and an important word in the wine world: terroir.

Franciacorta is simultaneously a region in Lombardia, a wine, and an (evolving) method of production.  The first bottle-fermented Italian bubbly to achieve the highest quality appellation DOCG (Denominazione di Origine Controllata e Garantita), its wines are highly esteemed domestically and drawing increasing attention abroad.  Wines are composed of Chardonnay and/or Pinot Nero (=Pinot Noir) and can also have up to 50% Pinot Bianco (=Pinot Blanc) in the blend.  Traditionally, and exclusively until rather recently, they have followed the Metodo Classico, or sometimes called “Champagne method” of secondary bottle fermentation: 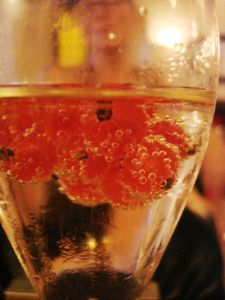 Metodo Classico or the Champagne Method of secondary fermentation:  The liqueur de tirage (=a mixture of wine, yeast, and sucrose- traditionally* in the form of cane or beet sugar) is added to a special bottle with a base wine (=a wine or blend of wines that is typically lower in alcohol and still, which in areas like Champagne can be composed of wines from multiple vintages).  This special bottle is sealed and the wine starts to ferment a second time, raising the alcohol level and absorbing all of the CO2 that normally escapes during the fermentation process.  That trapped CO2 is responsible for those delicious and desirable bubbles the modern drinker has grown to know and love.  Once yeasts have consumed all of the sugars present in the bottle, they die and fermentation stops.  Most producers of this style allow the wines to rest in that same bottle on the sediments for anywhere from a few months to a few years before eventually disgorging (=removing the sediment) and re-bottling/corking for release to the consumer.  This contact with the lees during and after secondary fermentation are responsible for the texture and bready and biscuity notes associated with Champagne and other bottle fermented wines.

The Trouble with Terroir & Imported Sugar:  For at least 50 years Franciacorta producers have mimicked the Champagne production process, including adding imported sugar for the secondary fermentation’s necessary liqueur de tirage.  This troubled Giovanni, Nico, and Andrea because utilizing Brazilian or any other foreign (=non-grape/non-Franciacortan) sugar in the process seemed to them to compromise the wine’s sense of identity – its very terroir (=unique characteristics and sense of place) becomes masked.  Giovanni explained to me that by making a wine like this “you taste the method and not the wine”.  Further, Champagne is a region with often unaccommodating weather to grapes, making it difficult for them to properly ripen and making sugar levels in grapes at harvest a wild card most vintages.  Champagne’s method of sparkling wine production is therefore custom designed for their specific climate and needs.  “In our region we don’t have the same problem with harvesting fully ripe grapes….so there isn’t any need for adding [foreign] sugar” Giovanni explained.  Inspired to find a new and more appropriate way for Franciacorta, Giovanni and Nico began experimenting in 2002 with their own grapes and wine. 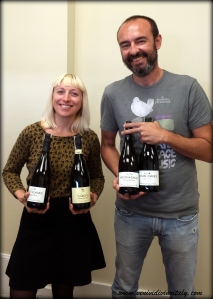 A Terr(oir)ific Result:  By 2008, after several years of trial, error, and fine-tuning, they were at last able to share the (fermented) fruits of their labor.  The new method that they created sounds misleadingly simple:  the grapes’ sugar levels are closely monitored for 40+ days leading up until harvest, ensuring that they harvest fully ripened grapes.  This already departs from the traditional method where grapes are harvested early and before fully ripening – something which is often necessary in Champagne but rarely in Italy.  A precise amount of the grape must (=unfermented sugar-rich juice from the freshly harvested and crushed/pressed grapes) is removed and frozen for later when it is used as their all natural liqueur de tirage, added to their single-vintage base wine in the bottle for the secondary, bubble-creating, fermentation.  And voilà:  a stunning Italian sparkling wine made using only its own natural grape sugars.  The result is a wine that doesn’t taste like it is an Italian wine dressing up in Champagne clothing….rather it tastes like nothing else except Franciacorta.  It’s a less heavy and very elegant sparkling whose notes of bread and biscuit do not upstage the magnificent fruit aromas and flavors that rightfully remain the star of the show.  What’s more, Giovanni and Nico chose to give their trademarked method away for free- other producers in Franciacorta are able to use their same method as they please…something which Giovanni and Nico hope and dream they will all do!

The Wines:  Acari + Danesi as well as SoloUva is available now on the international market (including in the USA).  Depending on state/local taxes, bottles should retail for around $30-40 USD, making this an affordable luxury for any occasion from graduation to everyday dinner.  While every wine will be from a single vintage, the blend’s proportions of Chardonnay and Pinot Bianco vary according to each harvest and style, as does the period of ageing.  To date they haven’t included Pinot Nero in a blend. Look for: 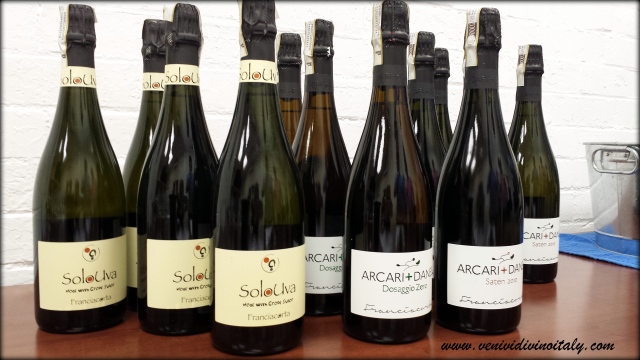 For updates and amazing photographs, follow their TerraUomoCielo blog or for those of you less fluent in Italian, check out Indie Wineries: Acari + Danesi. For info on where to buy this stunning stuff in New England, check out The Wine Bros.